“I think that is the mark of a great crew and the reason I race each year: while I always want to win, it is the crew I race for, not the victory.”

The bumps start today. It is a remarkable thing to chase a 60ft long racing shell, packed with eight rowers and their cox, with your own 60ft boat and complement of crew. It is the 150th anniversary of the Town Bumps this year, marking the point at which townsfolk took what the university colleges were doing and made it their own.

The influence and help of the colleges should not be underestimated, then or today. In Chesterton Rowing Club, our own small club, there are a number of people who started rowing at university, and some at Cambridge. We even have current members of the colleges boat club committee who share their enthusiasm and youth with our club (we’re a ‘mixed’ age group so the younger members are highly valued but also looked upon with a fair amount of jealousy).

With four men’s and women’s divisions of around 18 crews there are a lot of people taking part. My boat is in men’s division two. Like many crews we do not know much about the boats around us and therefore the first night will be a mysterious flurry of emotions, adrenaline and whatever the fates throw at us. The dice are cast at the moment the starting gun is fired. By gun I mean a genuine mini-cannon, so the noise is un-ignorable.

Boom, then the cox shouts: ‘Draw one, draw two, draw three’. The draw stroke is all legs. Power, pushing water, hefting boat and crew backwards. Backs are set, arms are as ‘relaxed’ as they can be with all the energy crackling down the boat. Then it’s a panic/control of winding up as, now with the boat moving the crew can increase their stroke rate.

‘Wind one’ and upwards the rate goes. It is here that the shadow of disaster is darkest. Here, with the rate increasing, the body or boat (and they are all-but-one in the nascent moments of the race) can betray the hours of practice and the hopes of the crew. A slippery hand, a too-tense arm, a shoulder set too hard, a leg-push over-done; sometimes you feel you are a finger-width from the edge of catastrophe. Then – with the boat accelerating you lengthen and suddenly you are flying. The water simply isn’t there anymore.

The pain of effort is kept at bay by a diaphanously thin euphoria. From here anything can happen. You can bump up, bump down or have to row the entire course, lungs bursting, chasing a cough that will haunt you all night, long after the blades have been racked.

I’ve been taking part in the race since 2006 and I can honestly say that, apart from the first year when I knew no better, there has been a moment, usually after the one-minute gun has gone off, that I have had a silent word with myself. Questioning why I decided to put myself through four nights of this. Four nights of extreme nerves, complete effort and almost guaranteed disappointment.

But then, when that final gun goes all concerns evaporate because you know you have to do what you can for the seven other rowers and the cox in the boat. And the crew extends beyond them of course. There is the bank party, your coach, the family and friends who have helped you make outings in the run-up and those who (in my case) have agreed to babysit so that both you and your partner can take part in this annual, city-wide insanity.

This Cambridge mania connects thousands of rowers across one small city in the south of England. It reflects 150 years of dedication from the organisers and the remarkable number of small clubs that make up the city’s rowing scene. Back at the start clubs like the College Servants and The Argonauts chased each other along the winding River Cam. Today landmarks like the Gut, Grassy Corner and Plough Reach are rushed past and bashed into by the idiosyncratic boats of clubs like 99s, City, Rob Roy and, of course, Chesterton Rowing Club.

For the rest of today I will be repeatedly checking that I have the right kit ready, wondering if I’ve eaten enough, drinking way too much water and feeling very happy that my crew is a wonderful group who have trained reasonably hard, had a lot of fun already and are the sort of people you’d love to win or lose with. I think that is the mark of a great crew and the reason I race each year: while I always want to win, it is the crew I race for, not the victory.

So, to misquote Browning completely: shine God’s glow-worms and don’t save your light for later. 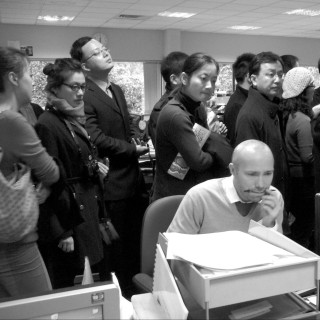 Work wise I am a journalist and press communications manager having had various positions in regional newspapers, latterly as news editor of the rather beautiful Cambridge News. Upon leaving I joined the wonderful team at the equally bonny British Antarctic Survey in the communications department. I now work at the University of Cambridge's wonderful Office of External Affairs and Communications. I believe communicating knowledge and particularly scientific research is a vital thing as the world faces huge challenges while vested interests and lack of reliable information only serve to delay the actions we must take. I also like rowing. And the music of Neil Diamond among others (I have no idea why).

Home of the NERC-funded Methane in the Arctic: Measurements and Modelling (MAMM) project

Photography and musings by Omar Parada

Reading and Writing Made Simple

My book and writing blog. Some rowing too, though I try to keep it under control.